I am a member of a club at RIT, which mentors FIRST robotics teams and supports the FIRST organization however we can in the Rochester area. One way we spread awareness is by hosting an exhibit at Imagine RIT, an annual creativity  festival were different groups on campus show off what they research/study/build to the general public. it’s RIT’s largest event by far, and quite a madhouse to be honest! 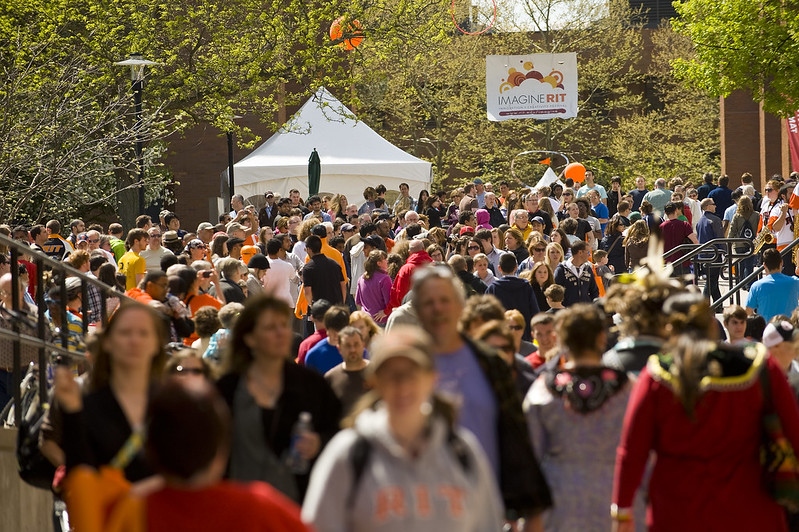 Our club hosts a booth where several local robotics teams show off their student’s creations, and we typically had a small area with some simple wheeled robots for kids to fool around with. in 2015 however, we decided those robots needed an upgrade. So we came up with Ping Pong Panic! , a miniature FRC game using ping pong balls.

For this project, me and my team members made use of The Construct@RIT, our student-run makerspace (which I happen to be a member of). We used the tools there to create the PCBs, the field,  and many of the custom parts for the robots. We used a COTS robot base kit from ServoCity and worked from there to create some easy- to use robot designs.

The Bots were created using Arduino Pro Minis for ease of programming and cost-effectiveness (we managed to keep this project within our budget of $250). They used a Nordic Semiconductor NRF24L01 2.4Ghz wireless transciever to communicate between each robot and the “field” arduino. this uC is sent commands from a laptop running a java program that reads data from four game controllers.

I didn’t get any video of the robots being used at Imagine (i was helping to run 2 booths, so I was in a perpetual sprint between those locations), but I did get some video of us testing them the day before.

The game was rushed to completion the night before the event, so things were a little shakey, but it workded! Kids never see the flaws in projects like these and they had a blast driving the robots around.  We intend to build upon these and make them even better for Imagine  RIT this year.

Remember kiddos, don't mix your wood and metal dusts!
Gosh it's been awhile! Many things are going on but few of them get finished. Here's something fun though - I converted an oily machine shop workbench into a workbar, and explored some new techniques along the way. Link to the full post in my bio ☝️
This little home shop just became quite a bit larger! The transit was questionable, but nothing broke. Planning a number of improvements to this tool, to soon enable quite a few future projects...
Summer's in full, heh, swing out here, so @decidedly_unremarkable and I put together a hammock stand! It's made out of some no-so-great plywood and electrical conduit, plus a few bits of hardware to hold things together. Blog post to follow w/ instructions if there's any interest in that! It's pretty great to enjoy some R&R outdoors without planting two trees and, y'know, waiting 20 years 🌳-_-🌳
A quick & dirty #functionalprint this evening, to repair a busted latch on a headlamp. The printed clip is simply CA glued to a flat face around the charging flap - you'd hardly know it wasn't original!
I solved a mystery and fixed my old #printrbot 's filament guide over the weekend! Small writeup at the bio link, for those curious. There are newer printers and better extruders to be had, but this cost me nothing and took only an hour or so to complete, so I'm satisfied. I just need to make objects again...