As an outdoors enthusiast, I’m pretty fond of topographic maps. I can’t explain it, I just like how they look!   A while ago, I came up with a creative technique of translating one of these maps into a 3D model, and produced a map of Mt. Ranier in Washington made of foam, lasercut into the forms of the mountain’s contours. It was a big hit on Reddit, and I always said I would make another one someday. A few weeks ago, with Christmas approaching and my gift wallet full of cobwebs, I decided it was high time to give these another shot. This time, though, I went with a range that is closer to home for me:

I’ve never fully climbed Mt. Washington, new England’s highest peak and the home of the Highest wind speed recorded by humans…maybe I’m saving it for the right moment. But I’ve been to its summit (and worked on trails up there with the AMC, but that’s another story) and have a great appreciation for how difficult a mountain less than half the height of most of the Rockies can still be.

The last map I created was done out of a bunch of foam sheets, which while being low cost did not go together easily. I decided to work with stained plywood this time, as I imagined the aesthetics would be better. This also allowed me to include an engraving of the various trails and peaks on the map, which satisfies my practical side (what’s a map with no info on it, after all?). Big thanks to Autodesk for making 123D Make free to use, it made the project a bit easier to finish quickly.

I started with a 3D mesh of the area, and brought it into AutdDesk 123D Make to generate the vector lines. I could have worked directly off a map for this, but this ended up being much easier

the shapes captured from 123D Make, and aligned. the red lines were very helpful in getting things in the right spot, but they won’t show up in the final product 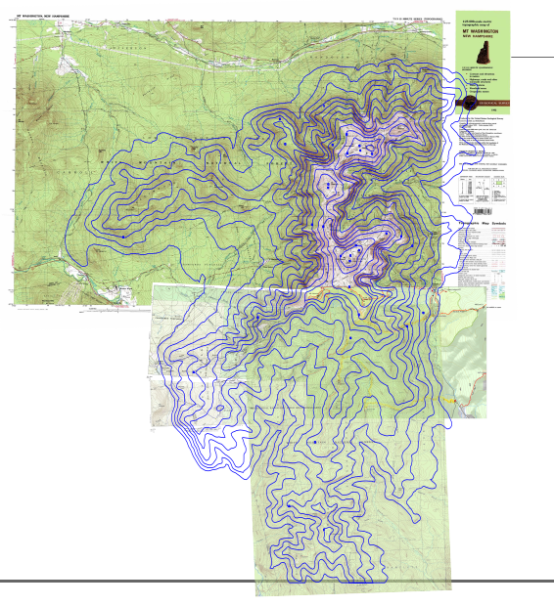 Adding trails – I utilized images from a few different sources, scaling and moving them to match the contours. There is definitely a better way to do this part…

It was now time to get cutting, so I fired up The Construct’s Lasercutter and got to work. I also took some time while this was running to prepare the colored stains that I would use, which were created from acrylic paint and water.

I started with a cardboard test. which was good because I messed up the top layer 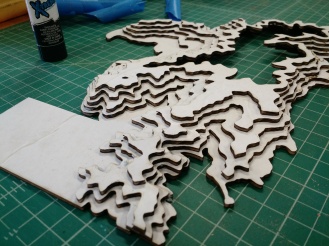 an Hour later, I get this beauty

separating the layers was a tricky process

staining the different heights of the map – I tried to go from a lush green to gray, and then finally to white 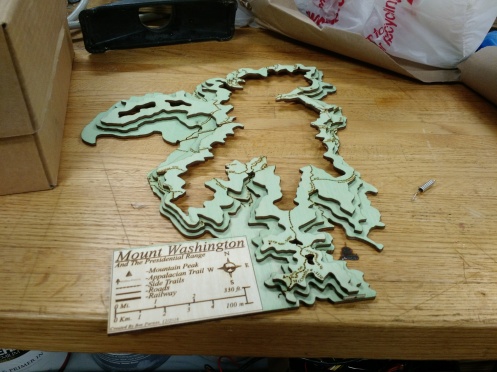 The result was…well, it actually turned out really well! Some of the trails and peaks are hard to read, but they can be fixed on the next version. stained plywood looks much better than the gaudy foam, and the “live edges” and legend make it look much more professional. I already want to make more (and I probably will, as long as I have some free time), so if anybody wants one, HMU…

Remember kiddos, don't mix your wood and metal dusts!
Gosh it's been awhile! Many things are going on but few of them get finished. Here's something fun though - I converted an oily machine shop workbench into a workbar, and explored some new techniques along the way. Link to the full post in my bio ☝️
This little home shop just became quite a bit larger! The transit was questionable, but nothing broke. Planning a number of improvements to this tool, to soon enable quite a few future projects...
Summer's in full, heh, swing out here, so @decidedly_unremarkable and I put together a hammock stand! It's made out of some no-so-great plywood and electrical conduit, plus a few bits of hardware to hold things together. Blog post to follow w/ instructions if there's any interest in that! It's pretty great to enjoy some R&R outdoors without planting two trees and, y'know, waiting 20 years 🌳-_-🌳
A quick & dirty #functionalprint this evening, to repair a busted latch on a headlamp. The printed clip is simply CA glued to a flat face around the charging flap - you'd hardly know it wasn't original!
I solved a mystery and fixed my old #printrbot 's filament guide over the weekend! Small writeup at the bio link, for those curious. There are newer printers and better extruders to be had, but this cost me nothing and took only an hour or so to complete, so I'm satisfied. I just need to make objects again...