This is part of TigerBug, a robot design I am working on for use at RIT for research and as a fundraising tool . Take a look at the project hub for more progress on different components of this project.

Swarm robots are tiny. really tiny. They’re intended to be as low-cost as possible, work in large numbers, and are typically used to mimic microscopic (or at least sub-human scale) organisms. This makes designing a complex robot that is also cheap, that is Also able to fit in the palm of your hand a difficult task. However, that was the task that I was presented with, and I think I’ve done a half decent job:

I decided initially on a few design features that would help with cutting costs:

And a few considerations to keep the size down:

And finally, considerations to make the robot perform as intended: 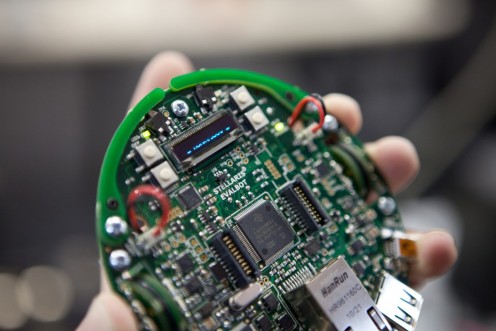 I started my design roughly based on the EvalBot from Texas Instruments, i.e. a circular differential drive robot with the motors and wheels located around the center of mass. As the limiting factor in this design is the distance between the back ends of the two gear-motors used to drive the wheels, I first modeled the motor we intended to use (at this time a small worm gear motor) and created a PCB placeholder to match. I placed the motors as close together as possible , as we were aiming for the smallest possible robot footprint (this makes the board cost less, makes the robot more maneuverable, and allows us to make more of them with our small budget).

Designing the parts around the PCB ended up being a pretty difficult task. I was not entirely following my goals at this point in the process and ended up with a bunch of spread out parts which, while appearing to all work together, really did not perform well. Due to my placement of parts above and below the robot’s PCB, this left very little space on the board for components, which I knew would cause design headaches further down the road. This design also required 5 bolts for each side of the robot, driving up cost. the placement of the PCB at the top of the robot prevented it from working well with the Infrared distance sensors we intended to use for object detection and communication.

It’s tough to come to the realization that the design you spent several days perfecting was ultimately too flawed to work with. After multiple component redesigns, I began to realize that every modification ended up making the robot more and more complex. Sometimes it’s best to just start over from scratch. And at this point, I’m Glad I did.

The motor mounts were redesigned  to work with a new gearbox, and optimized to be printed with minimal support material, and act as fastening nuts for the entire robot. The motor was positioned such that most of the part supporting it is floating above the board rather than pressed against it. This provides significantly more space on the PCB to be used for components.I also added parts to properly hold the wheel position sensors, and shrouds for the various light sensors on board. 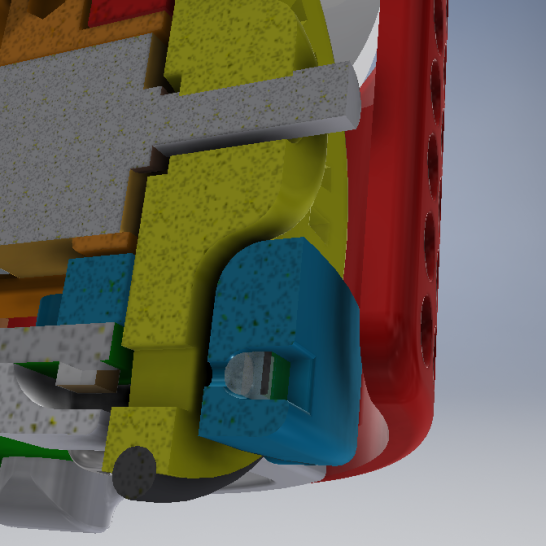 an Infra-red LED embedded in the printed component surrounding the wheel and a surface mount phototransistor comprise the pinhole encoder. 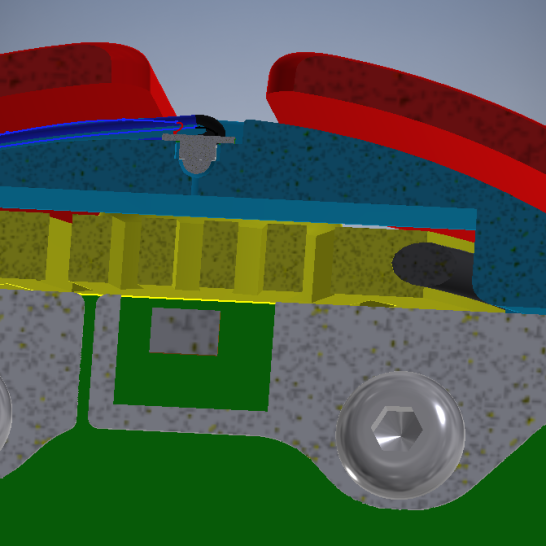 These are used to measure the position of the wheel.

Three m3 threaded holes mount the motor, PCB, top cover, bumpers, and all other components on each side of the chassis . Each side of tigerbug is symmetric about the robot’s Y axis, or direction of travel, in order to reduce the number of unique parts required. however, the number of parts required was not optimized, as I aimed instead to make each part as simple to 3D print as possible.

The design makes use of flexible parts to actuate the buttons on the PCB for obstacle avoidance, but they have been refined to be more sensitive and fit within the more cramped robot body.

Tigerbug is now ready to be printed, and it’s time to move on to the “placeholder” in the design, the printed circuit board and the brains of the robot. As well as figure out what other sort of circuitry this ‘bot is going to require.

This little home shop just became quite a bit larger! The transit was questionable, but nothing broke. Planning a number of improvements to this tool, to soon enable quite a few future projects...
Summer's in full, heh, swing out here, so @decidedly_unremarkable and I put together a hammock stand! It's made out of some no-so-great plywood and electrical conduit, plus a few bits of hardware to hold things together. Blog post to follow w/ instructions if there's any interest in that! It's pretty great to enjoy some R&R outdoors without planting two trees and, y'know, waiting 20 years 🌳-_-🌳
A quick & dirty #functionalprint this evening, to repair a busted latch on a headlamp. The printed clip is simply CA glued to a flat face around the charging flap - you'd hardly know it wasn't original!
I solved a mystery and fixed my old #printrbot 's filament guide over the weekend! Small writeup at the bio link, for those curious. There are newer printers and better extruders to be had, but this cost me nothing and took only an hour or so to complete, so I'm satisfied. I just need to make objects again...
I'm making me jelly! This is made from #local kumquats, which lie somewhere between grapes, oranges, and lemons.
Finding the remaining puzzle pieces for the shop - a shelf made out of @makerpipe junctions and conduit, and a @_husky_tools_ adjustable workbench for wrenching. It's great when things fit together just right 😌